9th Festival of science fiction and fantasy Liburnicon - Superhero Edition will be held August 28 to 31, 2014

Venue for Thursday and Friday's Newly opened hostel Link in Lovran
On Saturday and Sunday, most programs will be held in Opatija, 4 world guests - Convention Center, in the center of Opatija.

Over 100 parts of a program for 4 days exceeds every Liburnicon so far. Even 4 world guests : Ian Gibson from the UK and Gillian Pollack from Australia and Véronique Lejeune, and Frédéric Pinson from France! 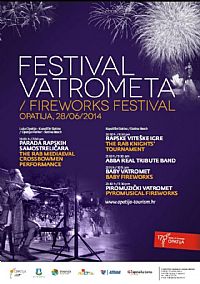 Opatija will host a festival of fireworks, accompanied with entertainment, music and gastronomic offer. The sight of Opatija under the glare of fireworks is unforgettable

22nd Festival of wind orchestras: Our world is music

Every year Lovran Wind Orchestra organizes and hosts several prominent orchestras from the Alps-Adriatic region, that gather on the first weekend in May to represent themselves, their region and country to local listeners and international guests staying at Liburnia.

Independent production in Croatia has a long tradition (remember Teatar u gostima, Tetar Gavran, etc.), but also a rather constricted basis, so this is the right opportunity to establish itself on the national level. With this initiative, the Festival Opatija opened perhaps a new chapter in the Croatian theatrical life, but it certainly stirred the interests of the audience eager to feel some different vibrations, the kind that independent production carries. There is no doubt that independent productions have been waiting for such an opportunity, and they will present themselves in the range from the Guinness recorder of “Stilske Vježbe” to the shows for children and an alternative approach to the theatre.

KLIKFEST Opatija, is a festival of films shot exclusively by cell phones. Will be held on 25th August 2013 in the small summer stage in Opatija.
LIBURNICON the festival of the fans of science fiction, fantasy, advanced science, history and mythology. Organizer - Association "Cultural Front" from Opatija. The festival lasts for two days and will be held in August in the primary school "R. K. Jeretov "Opatija. Over 1200 young people come to Opatija to socialize.